The Killing Fields are located on the outskirts of Phnom Penh and was a location of torture, interrogation and execution from members of the Khmer Rouge in the 1970s. Over 14,000 people are known to have entered and been executed. This location was once a high school and was renamed S-21. Each individual who entered S-21 was photographed as an inmate which included men, women and children. Any Cambodian who was educated, clean or Westernized was sent to the S-21 center by the Khmer Rouge under Pol Pot’s regime. The Killing Fields were discovered in 1979 by the Vietnamese and to this day they are still uncovering remains of the tortured prisoners. 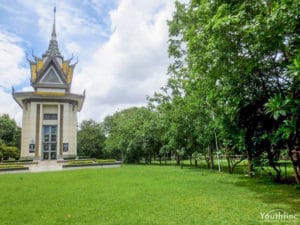 When you first arrive to the Killing Fields, you would assume Cambodians were sent there and immediately shot. As we listened to our audio of nineteen sides, we soon learned there were much more barbaric methods of execution by the Khmer Rouge. Because bullets were quite pricey, Khmer Rouge members resorted to tools and resources available to creatively punish innocent victims.

One site of the Killing Fields mentioned a single tree that was utilized in completing indescribable things to women and children. Specifically, Khmer Rouge members would take women whose husband committed a “crime” and was then tied to the tree and tortured. If they were pregnant their child was taken from them, smashed against the tree and thrown into a pile.

As we live in a nation with no recent history of civil war, it is difficult to process the evil that occurred in such a beautiful country such as Cambodia less than fifty years ago. Being educated about a topic and physically being present to such a site is an overwhelming emotional experience. Especially knowing the United States escalated the event non-directly by dropping over 500,000 bombs in Cambodia.

Why Everyone Needs to Volunteer
Learning Lessons from the Villagers in Yanamono II, Peru
International Connection: Interview with David Muiru
Spread the love
Tagged on: Cambodia    Global Community Leadership    International