By Jackie Moynihan and David Muiru 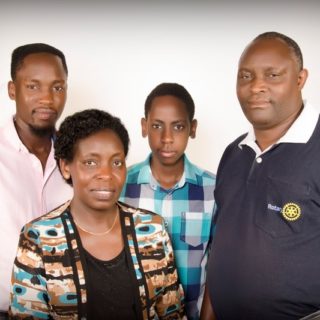 Youthlinc’s international efforts would not be possible without the help of our outstanding connections on the ground in the countries we serve. For the next several months, we will highlight our In Country Coordinators, and share their stories and experiences.

David Muiru, our Kenya In Country Coordinator, has been involved in Youthlinc since the very first team traveled to Kenya 20 years ago. We thought it would be fitting to begin our interview series with him.

How did you get involved in Youthlinc?

In 1996, I was to help the late Shirley Michel of Salt Lake City to manage a charitable project on her behalf at the Ngala School for the Deaf in Nakuru through regular visits on and off my way home in Nakuru. At the time of my acceptance little did I know what I had gotten myself in.

In the summer of 2001, I participated at the 2001 Rotary International Convention in San Antonio, Texas. During my visit in the USA, I visited Salt Lake City and was courteously hosted by Rtn. Dr. Vanderhoof and Rtn. Sue Vanderhoof and the Rotary Club of Holladay.

During the same visit, I was hosted for dinner by Rtn. Judy Zone in her house and there I met her family and the Youthlinc team, and the long journey with it began to date. I did not realize I was going to be Youthlinc’s Country Coordinator as my engagement as a volunteer was to help it with local logistics while in Kenya. I departed early for Kenya as the first Youthlinc visit to Kenya was about three weeks behind me.

How has our partnership evolved over the years?

Part of our many achievements in Meru was chartering the Rotary Club of Meru in 2006 courteously sponsored by Judy Zone.

In the year 2012, Judy Zone identified a new site in Kajuki in Tharaka. The program had been introduced by the late Fr. Joe and Jerika Mays. Youthlinc engagement from 2012 in Kajuki endured for eight years to 2019 with continued Youthlinc support when many community projects worth thousands of dollars were undertaken. During those eight years I met all the Youthlinc Teams and engaged with the Team Leaders.

We planned and planned, burned many midnight hours and air time, met Jackie, talked and corresponded with Jordan Taylor endlessly as we planned the 2020 program in Kenya. We thought we had it all in our bag until the deadly COVID-19 checked and the rest is history.

We are now re-planning for summer 2021 and it’s going to be a milestone two-decades (20 years 2001-2021) achievement that Youthlinc will be hosted in a new site/s in Nakuru, the original town where it all began under my coordination and the story goes on to infinitum.

What is your favorite memory from your time working with Youthlinc?

I have several favorite memories during my engagement with Youthlinc.

– Turning Ngala School for the Deaf; Kaaga Special School in Meru and the Kajuki Mission into vibrancy upon entry of Youthlinc with multiple community projects, to me, is an accomplishment of Youthlinc mission. Many years later, the projects stand and are seen and remind all of Youthlinc engagements.

-The opening ceremonies and hugging embraces for the last 19 years and the parting tears from both the Youthlinc team and the students of the visited schools possibly demonstrate to me the undocumented emotions and attachments that Youthlinc has created.

-Last June 2019, I took a member Youthlinc Team Leadership to Nakuru and on that trip we needed to go make a tourist visit to the Lake Nakuru National Park. Before the entry to the Park there is an acacia wooded parking and public recreational area that is infested with menacing baboons, the large types that scare visitors. My American visitors took the photos that they needed without any problem. We then embarked into the vehicle and as we closed the doors, one male baboon came and lay on the front windshield. Initially, I thought of flushing it away with the wiper. One of the American visitors sitting at the front left seat needed to take a better shot of the baboon with his zoom camera. To do that he lowered the window to take the photo. Within a flash of a second, we got shocked when the baboon slipped into the car through the half-opened window and there was a scream at the back seat. When we looked back the visitor was virtually fighting the baboon with her movements hampered by the fastened seat belt. My other visitor at the front seat realized that the baboon had taken over management of his friend. Out of reaction he went for her rescue and as he opened his door, I lowered the back-right window and on my way out I saw the baboon with a bag containing 4 packages of spectacles that had been handed over to me in Hamburg, Germany. He stopped the first time and opened the first package and dropped it as it wasn’t edible, he proceeded doing the same while all of us were in hot pursuit and the general public as well. He opened all the other two and eventually he entered the Park electrical fence where he abandoned the bag. In the future, we shall need a clause in the insurance policy against baboons.

What do you believe are the benefits to in-person international humanitarian work?

-Youthlinc’s mission is to create lifetime humanitarians, it therefore means there is humanity engagement as a denominator to fulfilling the mission and objectives of the organization.

-Young Americans are given a chance to see other countries and learn. What do they learn? The Americans may be living more privileged lives than most other parts of the world. They learn to appreciate the very basic needs of humanity and that to live happily one may not necessarily be surrounded by wealth.

-The hugging and embraces for the last 19 years and the parting tears from both the Youthlinc team and the students of the visited schools, how else would this have been achieved?

It’s been a great pleasure participating with Youthlinc as a volunteer in coordinating its activities in Kenya for the last 20 years and honestly, I don’t know why I am still on it. Working with its Management Team Jerika, Rebecca, Jordan, Jackie and others in the back office that keeps the organization running including its donors and supporters and the annual Team Leaders have always been a joy as I see charity in motions and practice and additional happiness to needy communities.